Unstoppable Spirit is comprised of two dramatic sculptures reaching over seven metres into the London sky and is the product of a unique collaboration between the acclaimed Italian artist Nino Mustica and Land Rover’s Design Director, Gerry McGovern. 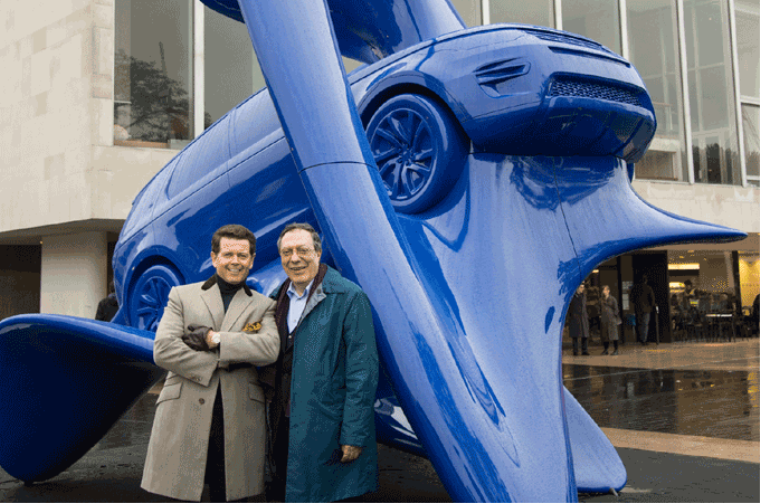 The pieces were inspired by the design and capability of the new Land Rover Discovery Sport and were unveiled during Frieze Week London on October 14th, 2014.

“Unstoppable Spirit is about the fusion between automotive design and contemporary art,” says Mustica, who has a studio in Milan. “As an artist I am able to work in the abstract with full creative freedom, however the Discovery Sport is a piece of industrial design that must be both versatile and beautiful. This work is a fascinating exploration of how these worlds collide and interact.”

“I have always been a huge admirer of Nino’s work and I’m delighted to be collaborating on this truly unique project,” says McGovern, recently appointed as a Visiting Professor at the Royal College of Art. “Our team at Land Rover understands that art and design are central to the creation of highly desirable vehicles that resonate on an emotional level. I believe art and design enrich people’s lives in all their manifestations. That’s why I’m proud to have revealed Unstoppable Spirit in such an iconic location on London’s South Bank.”

Made from a combination of steel and glass fibre, Unstoppable Spirit creates a striking juxtaposition with the brutalism of Southbank Centre’s Royal Festival Hall, originally built for the Festival of Britain in 1951. The two sculptures frame the front of the building, adjacent to the River Thames. Both measure over 7m x 6m x 6m and are of such a size that the integrated Land Rover Discovery Sport’s forms are replicated in a scale of 1:1.

To achieve the intricate curved surfacing requested by Mustica and McGovern, an innovative production technique was developed using Land Rover’s virtual reality cave, a process normally reserved for the development of prototype cars. The sculptures were then handcrafted in Turin before being transported to London. Such was the attention to detail that over 8000 working hours were required for their construction.